If you noticed a strange gizmo on a van driving the backroads of Newbury, Bradford, Topsham, the Fairlees, or Windsor in recent days, you saw the first step in ECFiber’s project to build world-class internet in those towns. The device, a Mobile Mapping Unit, uses a combination of cameras and laser scanners to rapidly collect data about utility poles. The data will be used by ECFiber network designers to create detailed construction plans this winter for its new member towns. 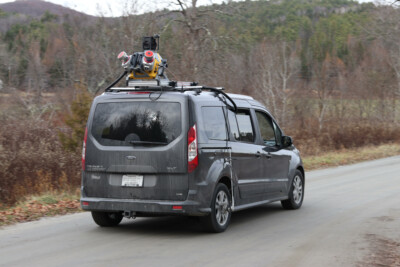 “The pandemic has made it crystal clear that rural Vermonters need world-class broadband, and ECFiber’s mission is to meet that need. We added eight new towns to our district this summer and we needed to find a faster way to collect pole information,” said Chris Recchia, ECFiber’s top executive. “In the past, each pole would be visited in person and various tools would be used to calculate the height of attachments and wires. It was time consuming and prone to error, resulting in construction delays. We think this new approach will make the design work more complete, the preparation faster, and the construction more efficient.”

The data being collected consists of photographs of the poles and a “point cloud” from the light detection and ranging (LiDAR) scanner. “I call the work we do ‘locational analytics’ because we are taking the exact location of millions of points and processing them to identify each utility pole and get an exact height of every attached wire and ‘see’ where the wires go, and link this data to the photographs,” explained Brad Folta, whose firm, Honey Badger Analytics of Brainerd, MN, is performing the work. “The end result is a highly detailed set of mapping data that gives the designers all the information they need before they start, not just exact pole positions, but also information about wires going from poles to buildings.”

Folta, who won national recognition earlier this year for his work with the Hallowell Water District in Maine, joined forces with Luke Birch, whose firm, Fulcrum Fiber of Lebanon, NH, specializes in services for telecommunications construction projects. “Our part of this project is to do the field work for poles that are located in the woods, away from the roads. Brad’s device can’t see those poles, so we still have to visit them one by one. The important part is to have experienced field workers using the most modern and sensitive equipment so that the data we collect is compatible.”

Birch proposed a statewide effort to collect pole data in August. “Luke pointed out that if the state really wanted the new communications union districts to be able to design more than a handful of pilot projects for 2021, a different approach would be needed,” explained F. X. Flinn, chair of the ECFiber governing board. “That conversation led to the pole harvest proposal ECFiber made to the state in early September. Although it got legislative support, the Governor’s CARES Act consultants decided the project wasn’t consistent with the guidelines the federal Treasury Department issued, even though the state had already approved smaller pole survey grants using CARES money. Despite that, ECFiber was in a position to get its area surveyed. This will serve as proof the method works, and perhaps under the Biden administration support for a statewide effort will be available.”

The fact is that utility pole information has not been maintained in a consistent manner by the companies that own the poles, and the kind of exacting detail necessary for a fiber optic network build has never been needed for past electric, phone or cable television network construction. So companies wishing to build fiber networks need to perform their own surveys. “One of the great things about the new effort is that the information we need to submit to pole owners in order to get permission to attach fiber to their poles will get generated automatically. This is going to save us hundreds of hours of office work and weeks worth of processing time. We need to accelerate our work because our new member towns are by and large internet deserts, and the pandemic has proven beyond a doubt that we can’t wait any longer,” said Flinn.

ECFiber announced plans for the 2021 construction season last month, targeting areas in the towns of Bradford, Hartford, and Windsor and all of Corinth, Fairlee and West Fairlee. In addition, the district announced it was in discussions with Washington Electric Cooperative concerning a joint project in the towns of Washington, Topsham and Newbury that may begin next year as well.

ECFiber is a Vermont municipality akin to a water district, and consists of 31 member towns. Formally known as the East Central Vermont Telecommunications District, it has no taxing powers and is funded entirely by municipal bonds backed by customer payments for service. As the only successful model for providing world-class broadband to every home and business in rural Vermont, it is being emulated by 8 new communications union districts (CUDs) that have been established throughout the state. ECFiber, Vermont’s first CUD, is the brainchild of the leadership of ValleyNet, Inc., a non-profit internet service provider that began providing dial-up access in the Upper Valley of Vermont and New Hampshire in the early 1990s. ValleyNet designs, builds, and operates the ECFiber network under a contract with the district. Each member town of the district has one vote on the board, which meets monthly.