Vermonters have a history of self-reliance, dating back to the electric and telephone cooperatives that were set up locally to cover the most rural parts of the state last century. We are proud to be a continuing part of that history – a local group providing universal availability of an important utility – broadband.

In the mid-2000s, several towns in east-central Vermont determined that robust broadband telecommunications services were a necessary part of their continued sustainability. Local broadband committees reached out to wireless service providers, but wireless proved to be unsatisfactory in our hilly wooded terrain. At the same time, a local non-profit ISP (ValleyNet) visited Burlington Telecom, which was operating a fiber-to-the-home network. In the fall of 2007, volunteers from 14 towns met and agreed that fiber-optic technology was the correct long-term solution for the region’s broadband needs. ValleyNet agreed to provide design, build and operations management, as well as provide required seed capital and assist with ongoing financing, and the required seed capital and hired the former manager of Burlington Telecom to lead the project.

After several false starts (see Financing,) we secured $1M in insider startup financing in 2011 and built a 20-mile pilot project.  As nearby neighborhoods asked to participate, we began to raise funds in $2,500 increments on a neighborhood by neighborhood basis, eventually raising a total of $7M from nearly 500 investors by 2015. The state of Vermont eventually provided over 100 miles of dark fiber as well as several grants totaling close to $600,000 as part of its connectivity initiative. In 2016 we became the state’s first Communications Union District, The East Central VT Telecommunications District, thanks to legislation passed in 2015.

In 2019, the state of Vermont embraced ECFiber’s “District model” when it passed legislation enabling nascent Districts to borrow startup funding from the VT Economic Development Authority and added staffing at the Dep’t of Public Service to assist Districts. 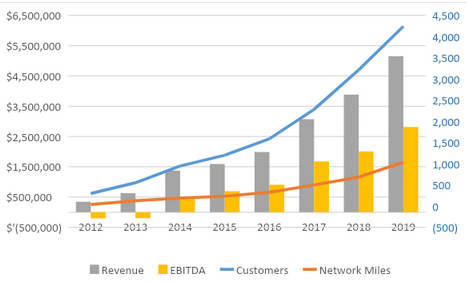 Our current operations are stable and results are excellent, but starting an ISP from scratch is not without its pitfalls.  In particular, ECFiber has been plagued by long construction delays due to numerous ‘make ready’ (the process whereby we pay utility pole owners in advance to make room for us on the poles) problems.  Current state regulations provide no penalty for pole owners, but ECFiber has been instrumental in improving make ready regulations in VT.